Introduction
In the painting White on White, by Mark Tansey (1986)1, there appears to be two groups of people meeting at a central point, in a seemingly unified field. Upon closer inspection of their clothing, animals, and other items, the people appear to be two groups from different cultures. Their clothing also suggests that there is wind blowing from opposite directions –  behind their backs, as they face one another. Is it sand or snow that is blowing? Is it both? They also seem to be looking for something in the ground, between them: an invisible gap, rift, or bridge. Two entirely unlike societies and two very different climates come together on one field in a single moment of decision. This is an impossible landscape that collapses time and space, where an unreal conjunction of characters meet to determine a pluralism of possibilities. This is, for me, a visual metaphor of the impossible possibilities of international art education.
Without the people and all their belongings, we would seem to have a unified field of white on a surface, where we could not determine the background as either snow or sand. As soon as we place the figures on the image, however, we determine the space through the cultural contexts of the figures. The background, then, can be understood as the field of international art education. It is an unreal and impossible place, since it must fold together geographic space to provide a unified field. It is, however, an empty space that is defined only by its agents (art educators and students, for example) and the difference their placement makes to how we see the field. So, in a sense, international art education exists, but only through difference, like the difference between snow and sand. The difference determines the field itself, which cannot be seen without the agents. As soon as we try to determine the field without individual contexts, indeterminacy traps us.
What this means is that international art education is a necessary illusion of sameness that represents the background for different figures, different agents, and different cultural contexts. There is, in art education, a permanent tension between determination and indeterminacy. The sameness becomes difference, and the tensions present us with challenges as we turn toward each other, and away. We are both blinded to, and searching for, the invisible rifts, determined to cross over borders, disciplines, and languages.
In what follows, I lay out a manifesto of sorts: A series of claims, and then challenges to those claims. The claims represent possible futures of international art education; in a sense, investing faith in “what is next.” The challenges represent the tensions within the field, and the contestation of a pre-determined future (that there is such as thing as “next”). The claims and challenges should be taken together, and through their tension the project of international art education remains an impossible possibility.

Claim: The future of international art education lies at the crossroads of participatory visual culture.

Access to, and the proliferation of newer media, digital networks, and virtual worlds will continue to provide art education with transnational and trans-disciplinary opportunities. Currently, art educators around the globe are using newer media, software, devices, blogs, wikis, networks, and all kinds of digital worlds to teach, learn, communicate, and collaborate with each other. Art teachers are inventing and using digital spaces, and conferences and symposia are more and more frequently held in cyberspace. These digital worlds manifest in situated knowledge, some sense of democratization, and new subjectivities. The worlds converge personal spaces, and real, imaginary, and internal and external realms of experience. In this sense, the future provides art educators with an opportunity to rethink concepts tied to the sovereignty of a “national art pedagogy” (German, Finnish, American, and so on), where diasporic and rogue practices are neither situated in one place or another, but a hybrid of many and none at the same time. The future offers art education opportunities for exchange, collaboration, across distance and time – forming and reforming (over and over) different communities of learners.

Challenge: There is a collective celebratory attitude toward participatory culture in art education.

This attitude emphasizes the playfulness and interconnectedness of visual culture at both a macro and micro level while virtually ignoring the relationship between power and knowledge. How might we hold accountable the macro structures, namely capitalist structures, which define the parameters, however malleable, and the material and discursive conditions that help shape individual and collective participation? Another challenge stems from the need to move from a form of technological determinism to seeing technology as agents of social practice. How might art educators consider technological actants, as collaborators producing irreducible social complexity?

Prosthetic visuality is a term coined by Charles Garioan2 meant to signify the revealing and concealing capacity of art and art education, in excess of itself. Prosthetic visuality emerges at the border in between personal ways of seeing and seeing that is socially constructed and shared – locally and globally. Devices, networks, and participatory spaces suture together different ways of seeing that both allow a transgression of normal patterns of seeing and knowing, and a collective and complementary process, where relationships change perceptual parameters. Prosthetic visuality is also about embodied knowing and being in the world. Through devices, we are, in a sense, cyborgs. As most of us with children know, being in the world includes fingers on the screen, eyes on a camera, the between spaces are part of our perceptual systems – impossible to delimit what is the supplement, what is surplus. Perhaps the future of art education is engaged through the indeterminacy of prosthesis, where seeing through and across devices, and constructing art education through digital spaces, is always constituted by disjunctive, fragments of images and ideas, knowledge, and understandings, whose complex, irreducible slippages of meaning resist synthetic closure.

Challenge: Art education is not the hardware of sociological determinism but the software of social practice.

As actants, both humans and non-humans enter into associations with one another that constitute networks. This symmetrical focus requires that the prosthetic visuality be analyzed not only for the ways that humans use technologies, but also to look to the technologies themselves for agentic forces that are a part of social -interactions. This way of rethinking technology is an extension of the posthumanist project, of expanding notions of subjectivity by utilizing the machine and animal hybrids of the cyborg imaginary to perceive human subjectivity as hybrid formations of data-bodies that disavow the autonomous subject, yet embrace complex notions of agency. In art education, this agency should reflect the mediating forces that construct the world, and ways of being in that world.

Claim: The consumptive aspects of everyday educational and learning sites should be explored and challenged through art education.

Art education in the future should open alternative -pedagogical spaces that reveal and challenge consumer-driven notions of public space and neoliberal lessons about freedom and democracy provided by global capitalism, and embedded in our visual culture. Neoliberalism is a powerful ensemble of ideological and institutional forces whose aim is to produce competitive, self-interested individuals vying for their own material and ideological gain, embracing the “market as the arbiter of social destiny. Art educators should explore the consumptive aspects of the everyday educational and learning sites that we teach in or learn in, and also challenge the educational and learning aspects of various sites of consumption. These sites can be formal learning or educational sites or informal, popular culture, or media-based sites of learning (shopping malls, sporting events, leisure sites, fast food restaurants, television shows, video games, magazines, movies, etc.). Art education must not be consumed by the all-encompassing cultural horizon, producing teachers as market identities and turning art education into, at best selection of consumer choices, or at worst, a private affair.

Challenge: Art education enhancing democracy while acknowledging that democracy is the form taken by institution’s attachment to capital.

If we know that many institutions serve primarily to integrate and consolidate capitalism, why do we present our political hopes through interventions sanctioned by the institutions and not something else? What might that something else look like? How might art education consider the market value of political action, especially against market values in the knowledge economy, including the so-called creative economy tied to art education, where we are all potential specialists? There is also the question of the singular universal – that is intervening as a subordinated voice to be an embodiment of society in its universality. In other words, one of the challenges for art education is the paradox of intervening against particular power interests as a stand-in for the universal. 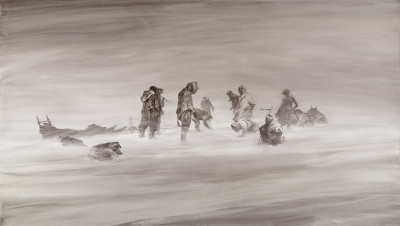 (*1965) holds a BFA, MEd and PhD in art education, and has taught public school and post-secondary courses since 1990. He is currently Professor of International Art Education at Aalto University, Helsinki, Finland. His research and teaching focuses on visual culture, critical pedagogy, curriculum studies, psychoanalytic theory, and art education. His work is published in international journals and books, and presented widely around the globe. He is the co-editor of the book Stand(ing) up, for a Change: “Voices of arts educators”.